May a young heart beat in your soul

I read an article this morning that wrote, "A young heart beats in the soul of a gamer."

While it's impossible for us to return to our teens, NExT have the good fortunate to bring our games to the world, and have a great time with all the "young" game enthusiasts.

As I would do with games, I'd like to savor this amazing moment at your side.

Let us start off with a good news. NExT's project 008 "biped" picked up Audience Choice Award during the widely-acclaimed IndieCade Europe. For a "young" game designer who’s walking on the streets by Gare de la Bibliothèque François-Mitterrand, the sight of Biped’s billboard lingers on in my head. I’m waiting to share this very moment of excitement with the next young soul. 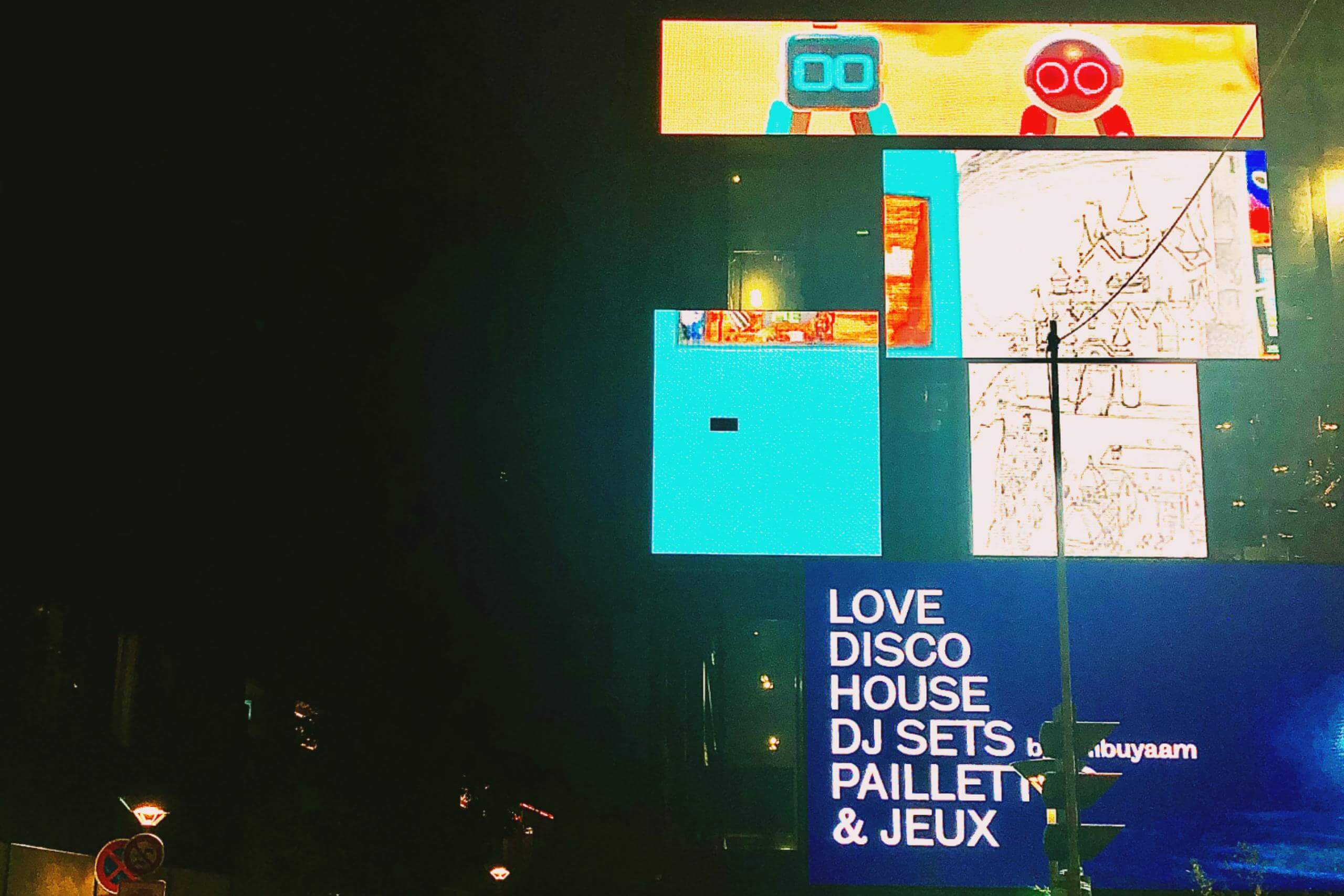 Our "little pride" on the street

What's cuter than the award is the trophy—a hand-stitched puppet swathed in lake-blue cloth, with several golden patches by the side; three golden stars are attached to the ribbon around its waist; a crescent is hanging on the left of its right eye; and its hat is more like a punched helmet where eyes are cast out through the hole like a curious soul of a youngster. When you turn it around, you find a piece of plastic tubing connected to its brain, delivering a steady flow of inspiration. Rumor has it that all the exhibits here are made from eco-friendly materials that are granted a second life. As if it reads the mind of producers, the trophy inspires their fighting will as well as sounding an alarm for them. Despite the setback during development, it is always important to stay hungry and curious, which is an unfathomable well of inspiration. Carefully wrapped in a carton by the producer, the "little prince" makes its way to a new country across the sea. This must be the masterwork of an artist with a young heart, because beneath its unadorned surface hides an inquisitive soul. 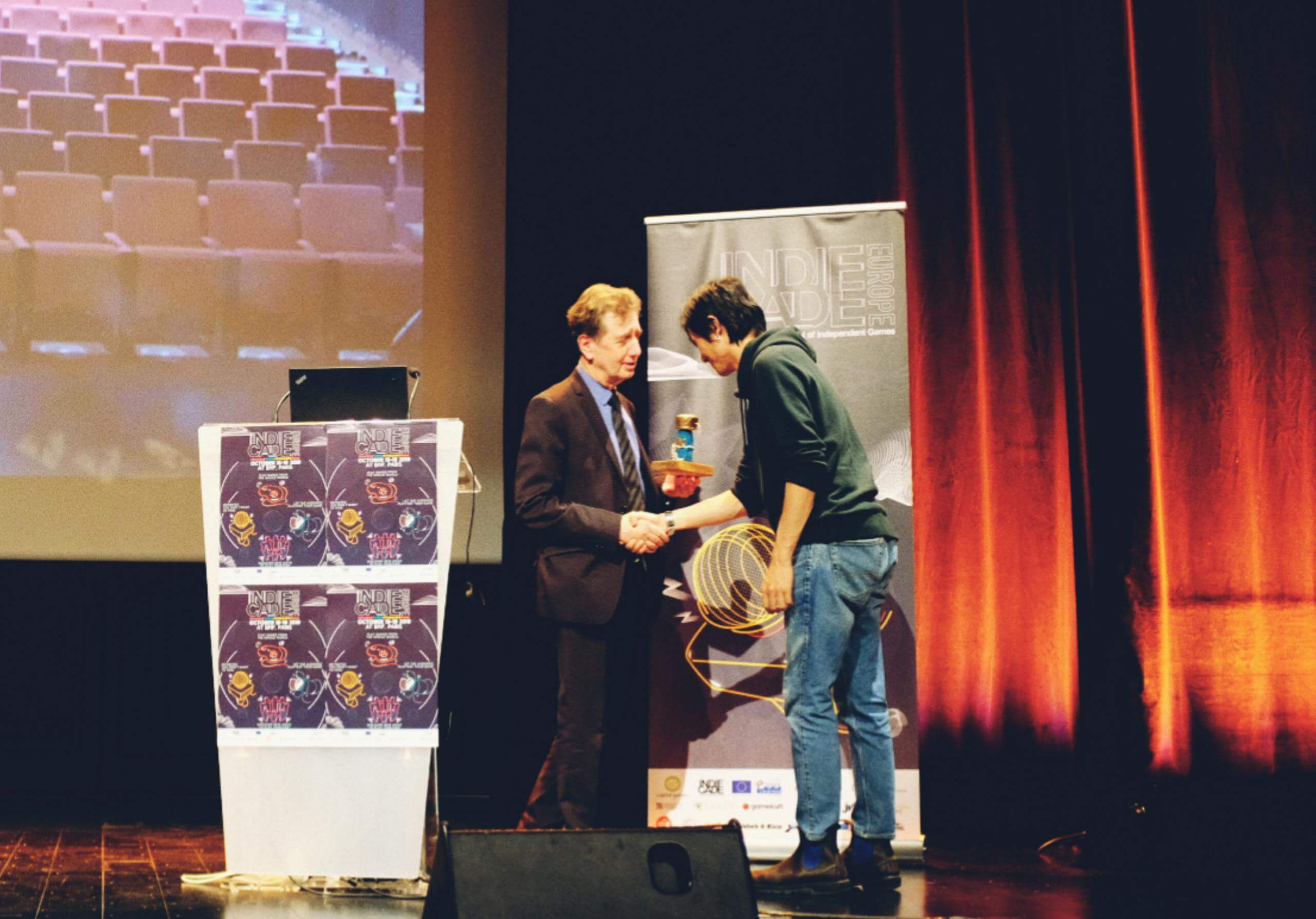 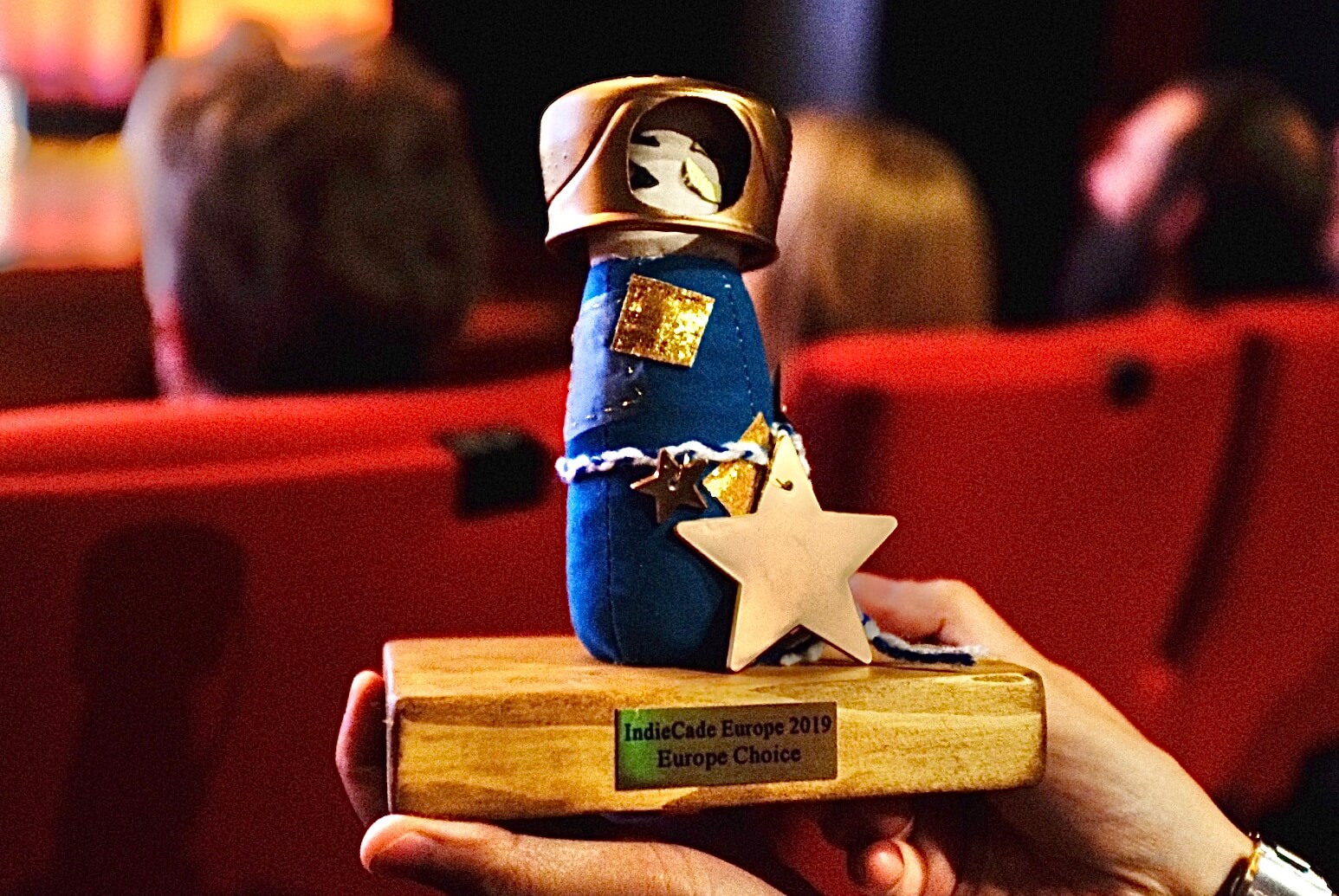 Over the course of multiple exhibitions, foreign or domestic, biped's booth is always the most bustling and cheerful one. I can hardly wait to recommend this game to my family and friends when the game is released on PS4.

An interesting story by the way: merely 5 days ago at IndieCade USA, biped was also nominated, but unfortunately missed the award, and great expectation came with disappointment. No one expected that such disappointment would soon fade away in Paris. Life is truly filled with ups and downs~~~ 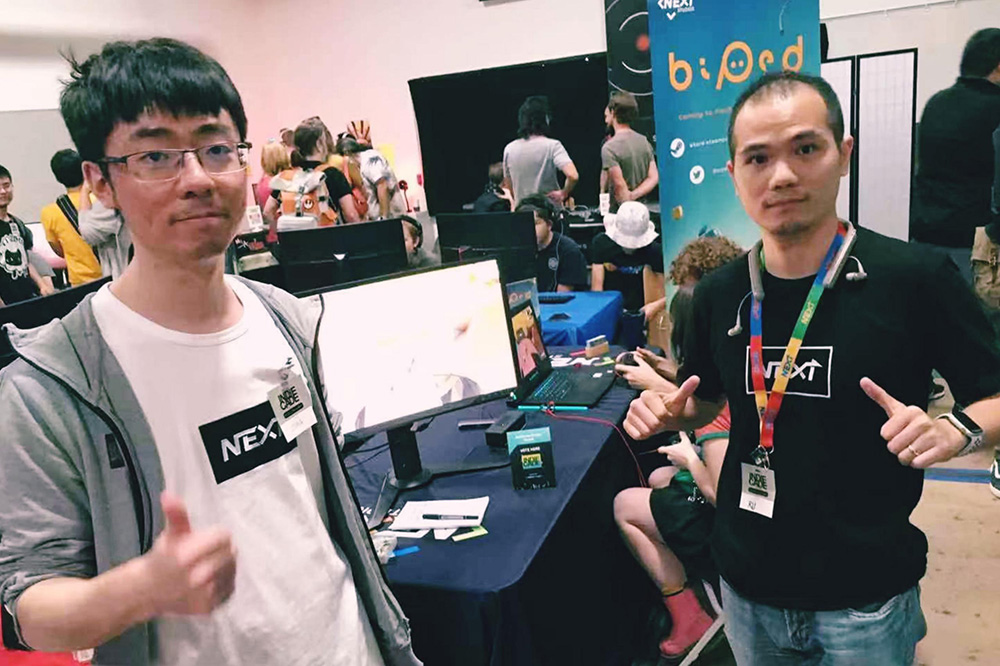 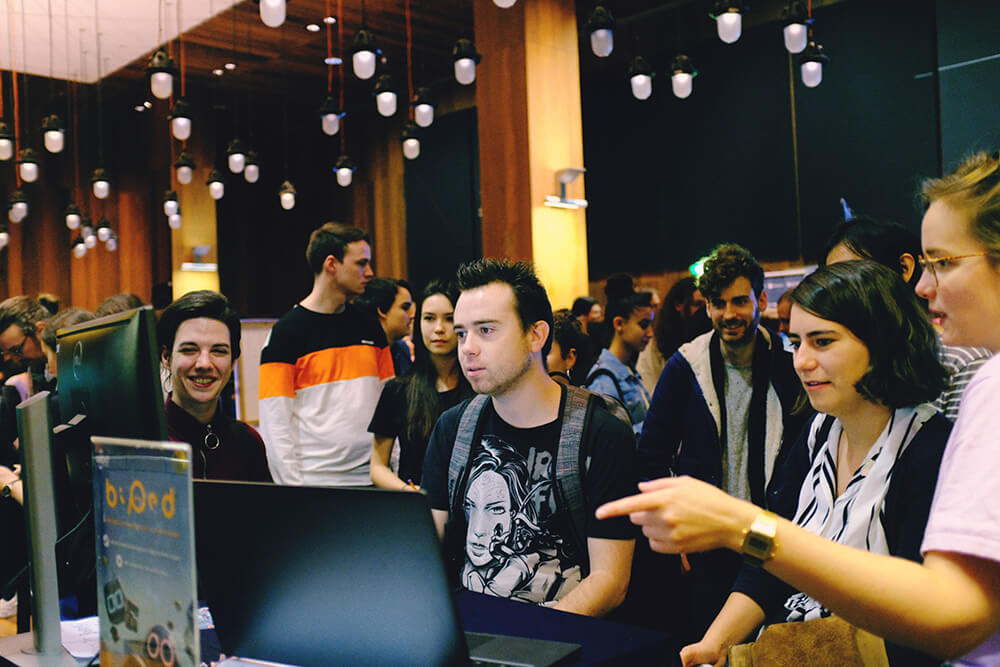 Wherever we go, biped is always well received

In Poznan, a midwestern city in Poland over 1000 kilometers away from the locale of IndieCade Europe, another group of developers made their public appearance with NExT’s released blockbuster Unheard, and their unreleased lineup: biped, Metal Revolution, and Crown Trick.

Compared with Warsaw, capital of Poland, and Kraków, the historic center, Poznan is widely known to gamers due to PGA.

Different from all the exhibitions we attended, 80% of the players in PGA are the real youth. Of course, there are also those gamers who choose to be young, which deeply impressed us.

There was a couple wearing a sunflower on the chest, and another developer duo at the adjoining booth who called themselves "the husband and the wife." They wore the most dazzling smile over the course of gameplay as if they were in their early teens. When you look at these photos, you can’t help but marvel at the beauty and power of smiles—whether you're good-looking or bad-looking, aged or young, when you find a game that touches your innermost purity, your authentic self always manifests itself. This is why our producer feels immensely flattered when some say that NExT's games always bring up their childhood memories.

The Sunflower couple and the "husband & wife" duo

There was a kind grandpa taking his lovely grandson who was running around among the long queues of players, looking for a vacant seat. When the exhibition was about to close, the boy finally found one. Our staff offered to play with him, and ended up getting carried away by him who kept saying, "I have an idea." Due to the advantage of his job, the staff had played through the game multiple times, while it was the first attempt for the boy. For most players, the first playthrough in this game often comes with frustration. Though all you need to do is to control the two feet of an alien with thumb-sticks, it is quite challenging for two players to reach the required teamwork score of 60. I'm bound to say that Biped is definitely the best choice for family and kids. Meanwhile, I wonder why kids can do better than adults in this game? One reasonable answer is that kids are usually more unadulterated, focused, and curious. Yet it is more praiseworthy for an experienced heart to return to its young spirit. 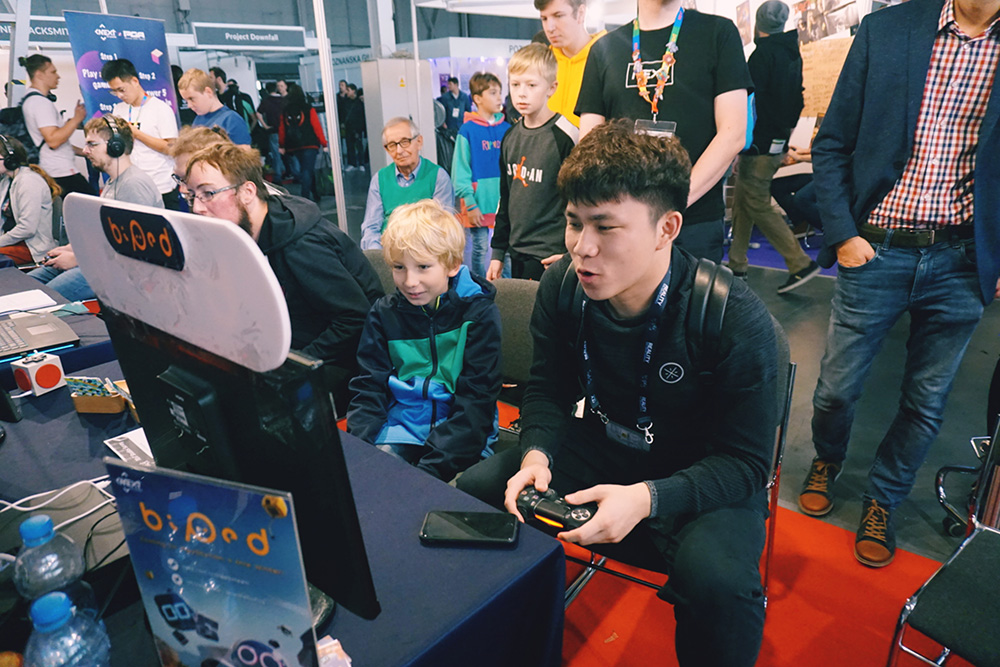 The shy boy on the left

There was a pair of twin sisters whose brother Mateusz (at first glance our staff mistook him as their father) was a super fan of Metal Revolution. Mateusz came up and asked, "Who's the best one here? I'm gonna challenge him." Such recklessness made all the staff burst into laughter. Though it was the first fighting game experience for the twin sisters, they were quite into it. Judging from its name, it seemed quite demanding, but the mother of two boys nearby kept saying, "Who would've thought the younger brother (7 years old or so) can play as well as his brother?" Compared with traditional fighting games, this game is easy to learn and features smooth 1v1 combat and breathtaking special effects, which brings to both starters and veterans a unique sense of satisfaction.

The twin sisters and their brother in a cap

Roguelike games always have their loyal fans. As far as I'm concerned, the secret of their success lies in is the random experience. Take Crown Trick as example, its twisted infinite labyrinth guarantees that you'll never enter the same room twice, and players are allowed to freely explore the dungeon of mystery. Its hand-decorated art style adds to the feeling of freshness. To explore alone is fun, and to embark on an unknown journey with friends is also sweet and memorable.

Those who've been following NExT must have heard about Unheard, an audible detective game that has received widespread acclaim on Steam. Guided by audio clues, you move from one room to another in search of the real criminal. There are currently five levels, and the development team has released two free-to-play DLCs, i.e. Deadly Scenario and Mid-Autumn Heist, which offers exhilarating stories and experience. Meanwhile, DLC3 is on the horizon. Though made by a Chinese team, this game's English edition adopts a top-notch localization procedure. While the original story is maintained, all characters' lines are based on the context, and there is a dramatic difference between Chinese and English in terms of way of expression, which is why this game is well receive all over the world. 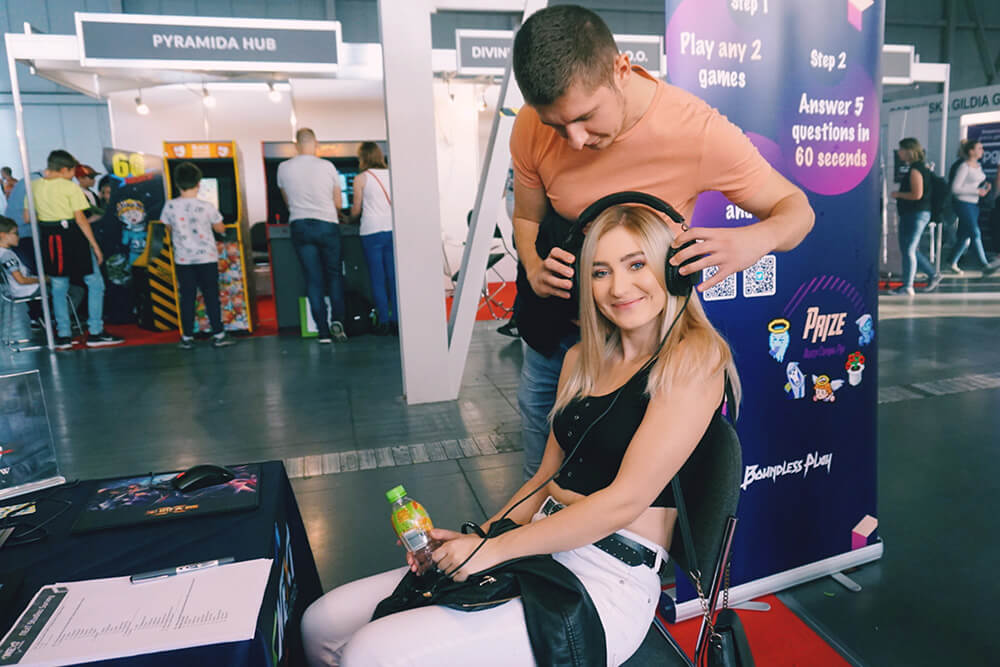 This girl is absolutely gorgeous

Life is a journey from one destination to another. "May a young heart beat in your soul."

Follow our journey, and I will be bringing you more stories behind our team~~~