NExT Studios at PAX West, a romantic date with gamers!

When NExT Meets Seattle

"Hi, it's fantastic! We will play the game tomorrow", a silver-head couple said to me, excitement in their voice. Looking at the long queue in front of our booth, I felt both sorry and honored and said, "Welcome!" This happened on NExT Studios' first day at PAX West.

The first day was hectic!
We handed out half of the A5 leaflets that were originally prepared for the whole expo.
We also reprinted the questionnaires twice because we didn't expect so many players to take interest in filling out them.
To make matters worse, there were no WiFi and cellular network signal at the expo.

We never expected the next three days to be more bustling than the first!

A photo of us before the expo actually started

Thank you, players, for all the love

Due to its special size, we couldn't find anyone to reprint them during the weekend. We didn't want to turn players down, so we used each leaflet three times and marked them using stamps, paintings and writings in Chinese. This was something that we never encountered before. 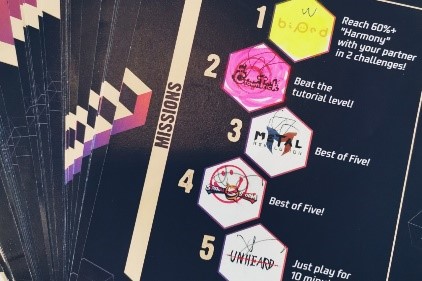 Could you see the markings we made? Isn't that a brilliant idea?

"Look, the kid is here again! He and his mom have come here for four days straight!" my college at the biped booth told me, didn't know whether to laugh or cry. Mother asked us when will biped be released on Switch. We received a lot of similar questions regarding this. As far as I can say, biped is planned for a PS4 release this year and the Switch version for next year.

Since biped is an extreme test of players' synergy with each other, some called it a "Relationship Test". We even saw the same girl playing the game demo with different guys for three days. Was she trying to figure out who is most in sync with her using biped? We have to admit that co-op games such as biped is really the best way to liven up the atmosphere for friends and families. The game was so funny that it even made a couple laugh to tears. They expressed their gratitude to NExT Studios for making such an awesome game. The crowd that didn't get to play the game due to the long queue were also amused by the it, they said that it is so much fun simply by watching others play.

It's fun just by watching others play

This is not the first overseas expo NExT Studios participated in. In March, we attended the GDC in San Francisco and PAX East in Boston. However, this is our first time at PAX West in Seattle. All of us fell in love with the player base here on our first day because they love games wholeheartedly. PAX West is our date with the gamers where we fell in love at first sight.

At PAX West, we held a Metal Revolution fighting tournament that lasted three days. The tournament was a great success, the booth was always crowded with participants and spectators when matches took place. The expo organizer even sent someone to help maintain order. The ever-present cheers and applauses at every critical moment even drew the attention of gamers at other booths.

The game will be made available on Steam, Android and iOS at around March, 2020.

Crown Trick, a Roguelike game, has won the heart of many Roguelike fans. Anna Marie Privitere from RPGamer, a renowned gaming media, wrote an article soon after she played the demo, claiming it is a game worth waiting for. It seems that she is very satisfied with over 150 weapons in the demo. The game is now under limited alpha test on Steam. You can visit Steam for more information if interested. During the expo, we even saw a gamer with a stool in the line. That's so professional! We were very impressed with the idea. It seems that at PAX West, gamers need patience as well as wits if they want to play popular demos.

Gamers immersed in the dungeons

It was the first time for us to showcase Spiral Storm, NExT Studios' 005 Title, at an overseas expo. The internet connection was quite bad, but we still received feedbacks from nearly 200 players. I can still remember a kid who came to our booth in the morning, he asked his father to take him back to our booth in the afternoon because he really liked the game and wanted to play again. A young male player was moved by the demo, and he told the staff that the game reminded him of Magic: The Gathering-Battlegrounds that he played as a kid. If the game we make can leave the players with wonderful memories, then the time and effort that we put in the making of those games are worthwhile!

Could you notice what changed in the boy?

Unheard was the only released game that we showcased at PAX West. It a game that requires players to wear headphones and immerse themselves in auditory detective stories. A little girl of about ten years old started playing the game at around 4 o'clock in the afternoon and was reluctant to leave when everyone else were about to leave. She even asked our staff why the limp was carrying a bomb. Would you like to know the answer to that question?

Since we were in Seattle, we decided to visit The Spheres, the new complex at the headquarters of the tech giant Amazon. The three glass domes form an "indoor rainforest" that houses over 40,000 plants from 400 species. Construction of this complex is quite expensive as it took Amazon around $4 billion to build from the ground up. The complex aimed to inspire employee creativity and to create a place for people living in the concrete forest to actually get close to nature. We marveled at the creek, the treehouse and the five-story "living wall" as we walked inside the domes. The wall features 25,000 small-sized plants and looked just like a vertical botanical garden. We also saw many plants that we don’t know the name of. To make the environment more suitable for plants, amazon designed a special ventilation system (The fans in the picture below) that simulates breezes.